A note from history circa pre-world war two: central Asia, incl. Kazakhstan, had been a huge interest of FDR's. President Roosevelt (Franklin not teddy) was secretly studying the potential of central Asia along with his Vice President Wallace.  It would behoove us to understand that this focus of FDR along with Wallace had been for "spiritual" reasons, as much as that is possible for the secular Federal officers.

In recent events, a violent shift is taking place in that part of the world, in particular Kazakhstan. This is the domino in the aftermath of Afghanistan. Here is an interesting detail, have a read: 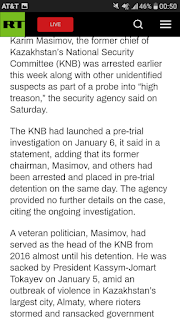 So who is this guy, this politico operative?  Might want to look into it, in order to put together the puzzle.  Does this mean that there's more fighting between the superpowers than coordinating?  Is Bitin gonna force his way into tHose 003549£ petrol resources even with Puden infesting the area?
Other analyZtS are asking if it is a resurrection of the Soviet Union starting to unfold.  Is it the new Soviet Union? Soviet Union 2.0?  I would say possibly it is!!! For the next few years we are going to find a resurgence and restructuring of the nation's around Russia. They are going back to their world war II roots. Soviet Union is rising up again, in some eerie form. It's not identical, but it's definitely reminiscent.
Russia's intervention into Kazakhstan is an opportunity being taken. This shift is a big shuffle. Is China watching warily?  How about TuRKey? How about my favorite Israel?  Israel! Long livE the true and Real Yisrael... And also Yudah.